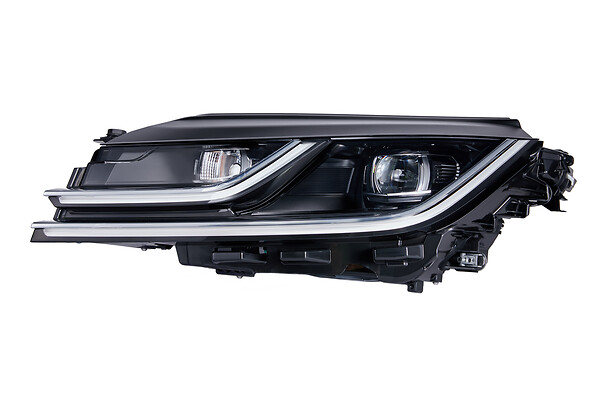 Different Light sources for Headlamps Halogen headlamps Automotive Halogen bulbs are the most used light sources for headlamps, representing more than 80% of the car park. The Halogen technology was first developed by Cibié (Valeo-owned brand) in the 1950’s and continuously been improved since that time, with, for example, the development of more complex and efficient optical designs (complex shape reflectors, elliptical modules) that allow the use of transparent lenses (as opposition to striped lenses) and new design possibilities.

Valeo was amongst the pionners of Xenon Headlamps in the early 90s. Xenon bulbs (also known as High-Intensity Discharge-HID lamps) produce light thanks to an electric arc generated between two electrodes. Xenon headlamps offer an increased visibility by more than 30% compared to halogen headlamps at a longer range (110m vs. 80m). Xenon headlamps also offer a light closer to daylight illumination, i.e. a whiter or blueish light, together with a lower power consumption (35W vs. 55W for H1 bulb) that allows significant CO2 emissions reduction by 1.3g/km and also a bulb lifetime that is 3 times the one of halogen bulbs.

Light Emitting Diode (LED) provides a very efficient light for less power consumption than halogen and xenon bulbs, together with extended design possibilities thanks to its compact size. First used in rearlamps for their new design capabilities, LEDs are now used in headlamps, at first on high-end cars but expanding very quickly on medium and low-end vehicles. Beside offering at least the same optical performance level as Xenon headlamps, LED headlamps have a lower power consumption and last the entire car lifetime. LED technology is gaining more an more popularity while Halogen is decreasing and Xenon disappearing.

In combination with the different light sources, Valeo has been developping several technologies improving driver’s visibility in the scope of the Adaptative Front Lighting System (AFS) regulations set from the early 2000’s.

Fixed Bending Light (FBL) and Cornering systems consist in additional reflecting surfaces or elliptical modules in headlamps or in foglamps, dedicated to corner visibility. The additional light source is switched on when the driver turns the steering wheel or activates the turn indicator. With the Dynamic Bending Light technology (DBL), there is no additional light: the elliptical module rotates up to 15° towards outside and 8° toward inside when the driver turns the steering wheel for a maximum visibility in corners.

The Xenon or LED module swivels in every direction and adapt the light beam according to the vehicle speed and the weather conditions to improve driver’s comfort and safety. The standard low beam automatically changes to “Motorway beam” at a speed around 110 km/h to increase the visibility up to 120 meters. Other full AFS options include “Adverse weather beam” that concentrates lighting on certain areas of vision to reduce the glare generated by reflections of the light on wet surfaces or on fog droplets. Lastly, the “Tourism mode” reverses the lighting of right-hand-drive vehicles for driving in countries where one drives on the right side of the road, and vice versa.

Valeo has developed a Adaptative Driving Beam (ADB) system that uses a camera to detect the presence of other vehicles. The headlamps remain in the main beam position and progressively lower the beam as an oncoming vehicle approaches, to avoid glare. The function also takes into account the rear lamps of vehicles driving in the same lane. In an even more innovative development, the camera and position captors will detect the road gradient and adapt the beam height accordingly. Those functions are grouped together under the name BEAMATIC™.